Read through the most famous quotes from Rodney Dangerfield

I came from a real tough neighborhood. Once a guy pulled a knife on me. I knew he wasn't a professional, the knife had butter on it. ↗

What a kid I got, I told him about the birds and the bees and he told me about the butcher and my wife. ↗

Once I pulled a job, I was so stupid. I picked a guy's pocket on an airplane and made a run for it. ↗

I came from a real tough neighborhood. Why, every time I shut the window I hurt somebody's fingers. ↗

I remember the time I was kidnapped and they sent a piece of my finger to my father. He said he wanted more proof. ↗

#finger #i #i remember #kidnapped #more

My wife and I were happy for twenty years. Then we met. ↗

When I was a kid my parents moved a lot, but I always found them. ↗

I could tell that my parents hated me. My bath toys were a toaster and a radio. ↗

#her #i #me #psychiatrist #seeing

I went to a fight the other night, and a hockey game broke out. ↗ 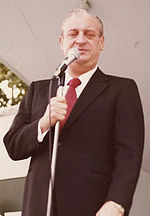 Did you know about Rodney Dangerfield?

His comedy album No Respect won a Grammy Award. In a change of pace from the comedy persona that made him famous he played an abusive father in Natural Born Killers in a scene for which he wrote or rewrote all of his own lines. Katz Professional Therapist (1997) (voice as himself) in the episode "Day Planner"
The Electric Piper (2003) (voice)
Phil of the Future (2004) (voice of Max the Dog in episode "Doggie Daycare")
Still Standing (2004)
Rodney (2004) Himself (Episode aired shortly after his death)
George Lopez (2004) Leave it to Rhett - Life insurance agent - Episode dedicated to his memory

Rodney Dangerfield (born Jacob Rodney Cohen November 22 1921 – October 5 2004) was an American comedian and actor known for the catchphrase "I don't get no respect!" and his monologues on that theme.