Read through the most famous quotes from Billy Connolly

When people say "it's always the last place you look". Of course it is. Why would you keep looking after you've found it? ↗

Life is supposed to be fun. It's not a job or occupation. We're here only once and we should have a bit of a laugh. ↗

If you give people a chance, they shine. ↗

Marriage is a wonderful invention; but then again so is a bicycle repair kit. ↗

There are two seasons in Scotland: June and Winter. ↗

Heckling is an act of cowardice. If you want to speak, get up in front of the microphone and speak, don't sit in the dark hiding. It's easy to hide and shout and waste people's time. ↗

Marriage is a wonderful invention: then again, so is a bicycle repair kit. ↗

Don't tell me how to do my job. I don't come to your workplace and tell you how to sweep up. ↗

I don't believe in angels, no. But I do have a wee parking angel. It's on my dashboard and you wind it up. The wings flap and it's supposed to give you a parking space. It's worked so far. ↗ 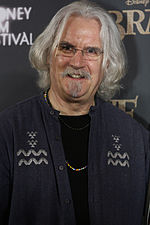 Did you know about Billy Connolly?

In 1970 the Humblebums broke up with Rafferty going on to record a solo album: Can I Have My Money Back (1971). Connolly and his older sister Florence (named after their maternal grandmother) were cared for by two aunts Margaret and Mona Connolly his father's sisters who resented the children for the fact that they had to sacrifice their young lives in order to look after them. He became a good friend of the host Michael Parkinson and now holds the record for appearances on the programme having been a guest on fifteen occasions.

He is sometimes known especially in his native Scotland by the nickname 'The Big Yin' ('The Big One'). CBE (born 24 November 1942) is a Scottish comedian musician presenter and actor. Connolly appears as the King of Lilliput in the 2010 remake of Gulliver's Travels.